A bit has passed for me since my previous post, but, 1967 was still an important year for Liverpool.

Today is Saturday 17th June 2017 and later this evening musicians from the Royal Liverpool Philharmonic Orchestra will perform two short settings of McGough’s heartbreaking poetic cycle ‘Unlucky for Some’ that I have composed for the wonderful voice of Aniko Toth.   This evening’s concert – which is a ‘sell out’ and the closing event of Edge Hill University’s ‘New Music’ festival Resonant Edge – is to celebrate the publication, 50 years ago, of ‘The Mersey Sound’ a fabulous collection of poems by Roger McGough, Adrian Henri and Brian Patten.  I met Roger McGough for the first time yesterday at the Liverpool Philharmonic, for the first rehearsals.  He was charming and very supportive of my work, quite a relief.  The musicians were so supportive and welcoming as was the conductor Peter Davison, who stepped in at the last moment – a big thank you there.

After discussions with colleagues at the RLPO with respect to the overall shape of the concert programme I decided to set two of the 13 verses from McGough’s ‘Unlucky for Some’ – my desire now to set all of the poem’s verses is even stronger… I’ll keep you posted, so to speak.

McGough’s ‘Unlucky for Some’ – first published in 1980 – is one long poem in 13 verses that tell the tale of heart-rending emotional isolation, from within the walls of a women’s hostel.

My first compositional ‘problem’ was to make a choice as to which I would set.  They’re all so powerful.  In the end, I chose What do I do for a living and I try to take up little space.

Given that the deadline was always going to be tight, I set about rather frenziedly setting the rhythmic scanning of the text; its melodic contour and sketching in initial harmonic and orchestration details to underpin the dramatic imagery of the poem.  For the melody and harmony I consistently drew upon possibly my favourite Beatles song (if it is possible to have a favourite from such an extraordinarily rich output) All You Need Is Love, which coincidentally is also 50 years old this summer!

In order that I could refer to the song’s fabulous melody I designed a very simple generative Markovian algorithm within the environment of OpusModus: 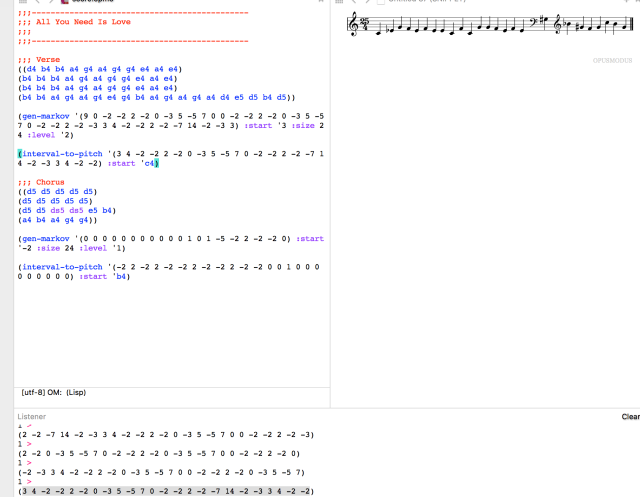 The rhythmic motifs of that fabulous Beatles paean to hope were also forever in my mind while I drew up my compositional sketches.  So while my settings do not sound like All You Need Is Love, they are certainly haunted by that anthem from the ‘Summer of Love’ and which, given the pathos at the centre of McGough’s text, seems profoundly apposite.

For anyone that’s interested in such things, I’ve uploaded the scores of my settings: unlucky for some – what do I do for a living

unlucky for some – I try to take up little space

Hope to see some of you there either tonight at The Arts Centre, Edge Hill University or at the Philharmonic in Liverpool on 27th, 28th June or 16th July.  I am honoured to be taking part in such a series of events.