On Friday 23rd March 2018 my new work Wreathed in Clover will be performed by Oklahoma City University’s Percussion Ensemble who commissioned the work.  The piece is dedicated to the memory, spirit and courage of the 369th US Infantry Unit.

I began composing Wreathed in Clover during the Summer of 2017.  During recent years I have realised a number of works commemorating centennials of the First World War very much from a European perspective (Somme, Passchendaele…) however, given that this was to be an American commission, I turned my research to US involvement in the Great War and discovered the extraordinary story of the Harlem Hellfighters … along with the incredible legacy of the musician James Reese Europe (1881-1919) who led the marching band of the 369th and introduced his very individual style of proto jazz to Europe.

The centenary of the Harlem Hellfighters’ service in World War 1 is upon us.

The all-black regiment was founded in Harlem in 1916; despite very serious issues of racism that they endured from the American military, they went on to become one of the most highly decorated infantry units in US military history and were amongst the longest serving American units in World War 1.

Given Over to French Command

On 8th April 1918 the 369th were handed over to French military command for the remainder of the war – it is worth remembering that white US soldiers in the First World War fought exclusively under US military command.  The 369th instead fought side-by-side with French soldiers with French weapons and uniforms.

The 369th earned their nickname the Hellfighters from their German enemies due to their fierce fighting reputation, they suffered significant casualties but never lost a prisoner nor did they surrender any ground – most of the 369th thought of Harlem as their home.

They served in many of the conflagrations in the broader campaigns that have come to be referred to as the Spring Offensive and the 100 Day Offensive, reputedly spending some 191 contiguous days in the trenches – longer than any other American unit.  Unit diaries also suggest that they were the first to cross the Rhine into Germany.

The men of the 369th were awarded 171 individual citations for bravery – recognised by French and US military.  Corporal Henry Johnson and Private Needham Roberts for their extraordinaryindividual bravery in May 1918 were awarded the Croix de Guerre by the French military – the first American servicemen to receive such senior military commendation.  The whole regiment was subsequently awarded the Croix de Guerre.  It took many decades for such high military honour to be afforded to the 369th by the US military.

James Reese Europe and The Marching Band of the Harlem Hellfighters 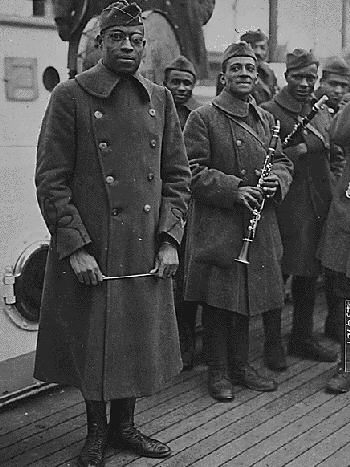 By the time that James Reese Europe signed up to serve the US military on their entry into World War 1 in 1917, he was already a very famous musician in New York City.  Reese’s music was deeply imbued with the then new sounds of jazz and ragtime, , however the complexity of his melodies, harmonies, arrangements – not to mention the lyric content – as well as his approach to sound more generally often went beyond the boundaries expected of such dance music formats.  For example listen to his piece On Patrol in No Man’s Land which successfully fuses ragtime, jazz soundworlds with that of sound/noise art.

All of No Man’s Land is Ours

For my work, I took the melodic, harmonic and rhythmic character of one of James Reese Europe’s most famous pieces All of No Man’s Land is Ours as my creative starting point through generative computer algorithms that I wrote in the OpusModus environment.

Through the soundscape of my work’s tripartite structure I attempted to paint generalised stages of the  ‘journey’ of the 369th:

In tribute to James Reese Europe I attempted to sonically paint these sections either with apposite soundscape textures or musical ‘foundsounds’ – examples of the latter include fragments of the French national anthem and those of the British and German in the work’s second section.  It is worth remembering that at during the First World War, the melodies of the British and German national anthems were identical!!  The third section of my work has traces of the US national anthem, along with fragments of the Last Post.

The photograph at the top of this article is  probably one of the most famous images of the Harlem Hellfighters.  Wreathed in Clover is scored for 9 percussionists  directly inspired by the 9 men presented in this iconic image.

We will remember them.

Many articles and music scores from Library of Congress

I would like to express my gratitude to colleagues at Oklahoma City University and Edge Hill University who have supported the realisation and performance of this work.